Cops in schools revisited and a good compromise on community oversight 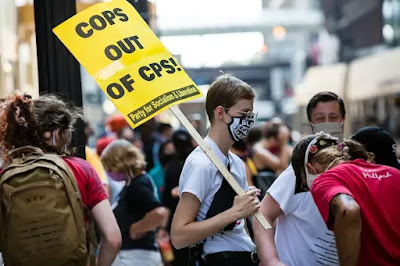 “By shifting the conversation towards more holistic approaches to safety, we believe that the new plans will enable schools to use strategies that are more proactive and supportive in keeping our students safe.” --Jadine Chou, CPS’ chief of safety and security.

I'm glad CPS, the City Council, and the mayor opted to allow Local School Councils (LSCs) to have a say over keeping cops in their schools or using meager discretionary funds to pay for alternative security options.

Yesterday, more than 30 Chicago high schools voted to redirect money spent on uniformed police officers towards alternative behavioral and mental health supports a year after intense student-led protests put a microscope on the role of cops in public schools.

The votes will shift about $2 million from policing to restorative justice programs, with a total of 31 high schools choosing to remove at least one of the two officers typically stationed inside their buildings.

In this case, those school communities made the right decision. But more importantly, it was their decision.

This should reaffirm our support for LSCs, a democratic reform we fought for and won more than 30 years ago, and my long-held belief that most basic decisions about the conduct and content of schooling should be made locally by teachers, parents, and students. In Chicago, top-down reform imposed on schools by the board, the mayor, state legislators, or the aldermen, has always been a failure.

Austerity -- It's shameful that this choice, like most others within our public school system, had to be made primarily on the basis of austerity rather than on principle or best practices.

A WIN FOR COMMUNITY OVERSIGHT

Yesterday, another good decision regarding community control of the police was made by city political leaders. Mayor Lightfoot and a City Council majority came together at long last on a police oversight ordinance that establishes a seven-member Community Commission for Public Safety and Accountability.
The City Council voted 36-13 to pass the ordinance. The compromise represented a defeat for the FOP and the pro-FOP caucus of aldermen who want less, not more community oversight of CPD. They included no-voters: Brian Hopkins (2nd); Anthony Beale (9th); Patrick Daley Thompson (11th); Marty Quinn (13th); Edward Burke (14th); Matt O’Shea (19th); Silvana Tabares (23rd); Ariel Reboyras (30th); Nick Sposato (38th); Samantha Nugent (39th); Anthony Napolitano (41st); Brendan Reilly (42nd) and Jim Gardiner (45th).
While it's a far cry from the original CPAC proposal demanded by some left activist groups, both the mayor and many of her die-hard council opponents are cheering the compromise.
Ald. Roderick Sawyer (6th), a strong advocate for civilian oversight, said “democracy is messy” for good reason. Ordinary people need to have “great involvement” at all levels.

“There’s a disconnect between police and our communities as it relates to solving crimes. In order for us to get back to that, we have to get the community involved. This takes a strong step with re-engaging, resetting our relationships between the community and the police,” Sawyer said.

And listen to the leader of the anti-Lightfoot caucus from day-one, Ald. Carlos Ramirez-Rosa (35th):

“Sometimes, we were at odds. But we came together because we knew that our city had to get something right ... to ensure that people in every single community feel safe. That they are safe. No one should be afraid of violence — whether by another citizen or by those tasked to protect and serve them."

Lightfoot called the debate “one for the ages” and made passing reference to the contentious negotiations that set the stage for the compromise.

“We’ve come a long way. We’ve had some stumbles. We’ve had some disagreements. But because of the hard work [of so many], we are on the precipice of making history,” the mayor said.

A little over-the-top? Maybe. But I'll take it for now.