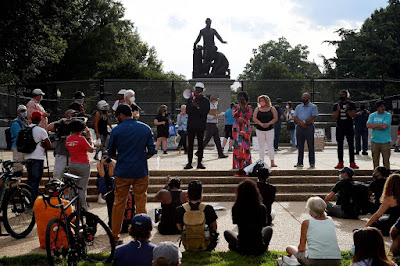 Frederick Douglass on the Lincoln statue


“The negro here, though rising, is still on his knees and nude. What I want to see before I die is a monument representing the negro, not couchant on his knees like a four-footed animal, but erect on his feet like a man.” -- 1876 Letter


“Now we have tested almost 40 million people. By so doing, we show cases, 99% of which are totally harmless.”  -- Guardian


“Systemic racism doesn’t just evidence itself in the criminal justice system,” said Quinton Lucas, who is the third Black mayor of Kansas City, Mo., which is in a state where 40 percent of those infected are Black or Latino even though those groups make up just 16 percent of the state’s population. -- The fullest look yet at Corona inequality (NYT)


“We seem to have a president that has given the green light to the racists to come out of the woodwork and start attacking Asians,” said state Assemblyman Al Muratsuchi (D-Rolling Hills Estates), who represents Torrance, the scene of some the most widely viewed hate episodes recorded on video. -- L.A. Times


"I want to make sure that he has National Guard down here and they have the order to shoot to kill if any of these son-of-a-bitch people start rioting like they have in Dallas, start tearing down businesses — shoot to kill the son of a bitches. That’s the only way you restore order. Kill 'em. Thank you." -- Texas Tribune

Your reminder that America's richest 1 percent now own half the value of the U.S. stock market. The richest 10 percent own 92 percent.

So when Trump says the stock market is the economy, know who he's really talking about.
— Robert Reich (@RBReich) July 5, 2020