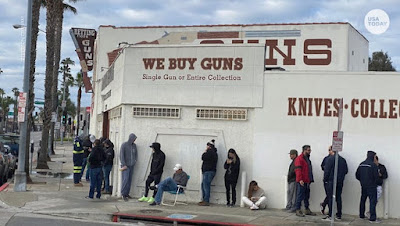 Gun sales are skyrocketing around the country including in the Chicago area. A mainly white racist fear/rage response to Trump's looming election loss, government's pandemic "mask-wearing tyranny," BLM protests, and threatened defunding or disbanding of police is driving long lines at gun shops around the country.

In Illinois, for example, from June 1 to June 17, there were more than 42,000 applications for cards to legally possess a firearm, compared with about 7,000 during the same time last year, a 501% increase, according to the Illinois State Police.

Sturm, Ruger stock shares are at their highest level since before Trump was elected; Smith & Wesson’s stock is at a 19-month high.

White panic-buying is overwhelming local gun shop owners. Check out this post from this firearms dealer in the Chicago burbs. 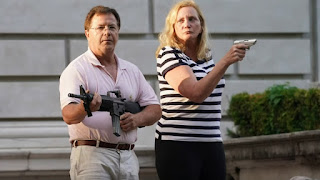 This on top of gun threats and actual shootings of peaceful protesters could presage a new level of Trump-inspired, right-wing violence. In Louisville, Ky., a man opened fire from the edge of a Breonna Taylor killing protest area in a park Saturday night, and a 27-year-old photographer was killed. Some bystanders in the park fired back, injuring the shooter, according to a police report.

In the past month, at least seven people with ties to far-right extremist group boogaloo have been arrested for attempting or carrying out violence at recent protests.

It was just two years ago, following the school shootings in Parkland, FL that the youth-led movement for gun control had gun manufacturers and the NRA on the ropes. Chicago was the jump-off point for anti-gun rallies across the country. The Parkland students “Road to Change” tour was launched at the annual “Rally for Peace” at St. Sabina’s Church. Those students jarred the national consciousness when they were able to swiftly organize a massive “March for our Lives” rally in Washington and related marches in other cities. It was a youth movement, much like the current one but not as diverse, that many believed had the potential to derail Trump and his MAGAs.

After 65 people were shot, 17 fatally in Chicago last weekend, including a 1-year-old and 10-year-old Lena Nunez, in our Logan Square neighborhood, blocks from Mayor Lightfoot's home, the Mayor made a powerful statement that caught my attention.

Everyone needs to wrap their arms around their children, not just the ones who are victims but the shooters as well, Lightfoot said.

There's a growing recognition that in many cases, but for fortune, the shooters and their victims could be interchangeable. Both they and their families are victims in their own way.

The mayor's statement stood in stark contrast to the Trumplike one made by CPD Supt. David Brown who targeted those he called, "these evil murdering bastards."

He's either got to get straightened out by the mayor or follow his failed predecessors Eddie Johnson and Garry McCarthy out the door.
Posted by Mike Klonsky at 3:01 PM