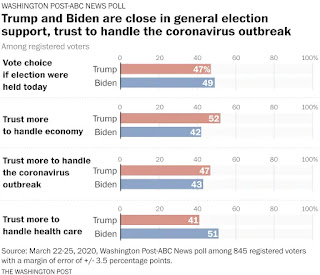 According to today's Washington Post-ABC poll, Trump and Biden are running neck-and-neck. One can only wonder how big a lead Biden would have if he was running as serious a campaign against DT as he is against Bernie Sanders and the party's left-wing? Since capturing the lead against Sanders in recent primaries, Biden has retreated to the sidelines as President Trump has stolen the spotlight with daily coronavirus briefings.

But now, Trump's numbers are crashing over his handling of the coronavirus. His approval ratings have plunged a net 13 points in less than a week. At this hour of crisis, with an anxious public desperately looking for leadership, the grifter president is proving once again to be a divisive and dismal failure. Now seems like the time for Dems to take the offensive.


Near-universal support for social distancing. People want it to continue as long as public health experts say it's necessary. Republicans are already trying to walk back Trump's asinine calls for "reopening the economy" by Easter and quarantining individual states. They say, "he was just thinking out loud."

Also, state and local government leaders are more trusted on the pandemic response than Trump and the federal government.

The problem for Democrats is that governors, sure winners if they were running, like Cuomo and Newsom (and I would add Pritzker), aren't in the race. Joe Biden is.

But where is Biden? According to Jon Levine in the NY Post, Biden has been turned into
"a virtual prisoner of his Delaware home, where he’s reduced to sniping at President Trump from the family rec room."


“He’s making himself irrelevant,” Saikat Chakrabarti, a former chief of staff to Queens Rep. Alexandria Ocasio-Cortez, told The Post, saying the virtual broadcasts were not helping. “We need action immediately, and Biden can’t do anything real right now.”

Biden and the party leadership seem lost and ambivalent about taking on Trump. Anita Dunn, a top Biden advisor tells Politico, “Everything that's happening right now is like nothing I've experienced in previous presidential campaigns."


“Biden has a thin line,” an outside adviser said. “As much as I dislike Trump and think what a bad job he’s doing, there’s a danger now that attacking him can backfire on you if you get too far out there. I don’t think the public wants to hear criticism of Trump right now.”

The adviser doesn't tell us how Democrats are supposed to win a close presidential election without criticizing Trump. The fact is, it just won't happen. Maybe it's time for some new advisers.

Now,  possibly reacting to pressure to wage a more aggressive campaign, even in these difficult times, the party centrists have let Biden out of his bunker for some national face time.

At last, there was a Biden sighting on Meet The Press this morning.

Biden had some mild criticism of Trump's tardiness in confronting the virus. Better than nothing, I suppose.

But then a jaw-dropper. In response to Chuck Todd's question about whether or not he would continue sanctions against Iran, Biden went all Trump on us, claiming he didn't have enough info to answer the question and then implying he would keep sanctions alive since the Iranians were likely "lying" about their numbers of dead COVID victims.

I know we have to support Biden against Trump. But at times like this, you have to wonder if the Dems really want to win and if they're really going to offer progressives and young people a real choice, rather than a fading echo?

EXCLUSIVE: Would Joe Biden temporarily lift sanctions on Iran during the coroanvirus pandemic? #MTP #IfItsSunday@JoeBiden: "There's a lot of speculation ... that they're in real trouble and they're lying. But I would need more information to make that judgement." pic.twitter.com/d6KFmcm9FZ
— Meet the Press (@MeetThePress) March 29, 2020