So here's Paul Vallas, running for mayor of Chicago and carrying around a broom in his TV ads,  a prop designed to portray him as the anti-corruption candidate. Clever, right? He's the one who's going to sweep corruption out the door.

It harkens me back to 2008 when D.C. schools Chancellor Michelle Rhee posed holding a broom for the cover of Time Magazine and then  was implicated in one of the country's biggest test cheating scandals. Rhee became the darling of the corporate-style school reformers and school privatizers who poured millions into her Students First organization. Then, after serving as a corporate exec with a fertilizer company, she tried to become Trump's ed secretary but lost out to Betsy DeVos. 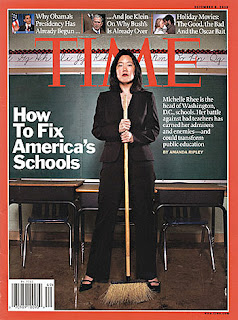 Now comes another former big-city school chief with a broom, the guy who was Gary Solomon's mentor. You remember Solomon. The force behind the biggest scam --SUPES -- ever to hit the Chicago Public Schools. Solomon and his partner in crime, former CEO at CPS, Barbara Byrd-Bennett are now doing prison time for that scam. But it was Vallas who taught Solomon the ropes and somehow, he's walking free, carrying a broom, and running for mayor of the country's third largest city.

After leaving CPS, Vallas developed ties with education consultant Solomon during his tenure at the Philadelphia and Louisiana districts. He then named Solomon to run his Synesi consulting company. Solomon had become adept at penetrating school districts from around the country after buying off their top school officials with perks and bribes in exchange for expensive consulting contracts.


When Solomon worked as vice president of sales at The Princeton Review, the Philadelphia district Vallas ran was a client. Solomon later launched an educating consulting firm that touted itself as connected to the “Vallas model” of school reform. Vallas, who had no formal links to Solomon's firm, chastised the consultant for trying to capitalize on Vallas' reputation.

But Vallas got over his annoyance. He took Solomon with him as a consultant when Vallas moved to Louisiana to rebuild a school district battered in 2005 by Hurricane Katrina. A few years later, Vallas was recommending to Peoria that it hire another Solomon-run consulting firm, though no contract was signed. Vallas disputed the assertion that he had pitched work specifically for Solomon's firm.

Vallas previously has told the Tribune he stopped working with Solomon in 2010, but has declined to explain why.

My advice to Vallas. Ditch the broom. It doesn't wear well.
Posted by Mike Klonsky at 1:46 PM