“Here they are coming right back after they claimed they were going to save money [by closing schools] ... and yet they’re saying, ‘Oh by the way we didn’t save any money, now we’re going to have to slash the budget of every school in the system.” -- CTU's Jackson Potter 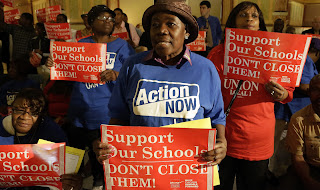 Chicago principals, including those in charter schools, are still in shock after getting a glimpse of their shrunken school budgets and hearing Board President Vitale's instructions to "do more with less." That's the new mantra, now called The CPS Way, dressed up with slick brochures and videos complete with a new "5-Year-Plan". Many teachers and staff are already being told they will not be needed in the Fall.


“We fundamentally believe that all of our children are capable of success, and to ensure that success, every child must have equitable access to a high-quality education,” said Byrd-Bennett, accompanied at Westinghouse College Prep on Monday by a video called “The CPS Way” and a glossy, 25-page brochure titled “The Next Generation: Chicago’s Children.” -- Sun-Times

Yes, the squeeze is on. The air is filled with empty rhetoric and cliches about equity and "all kids can learn." But when 350,000 kids return to school in the fall, they will find hundreds of their teachers gone, many of their neighborhood schools closed, and the ones that remain open having class sizes of 40 students or more.

Once again my favorite quote comes from CPS Liar-in-Chief Becky Carroll who lays out her definition of equity.

And while the mayor turns CPS schools into beggars, he's threatening another big property tax hike to help him close a $1 billion budget gap. It's his way of turning the tables on the CTU and shifting blame for his mismanagement plunder onto the union, "greedy teachers" and pensioners. The one place he and Quinn and Boss Madigan won't go for new revenue, of course, is taxing Chicago's biggest corporations, many of whom don't pay a penny in taxes.

In case you really believed all of Rahm's poor-mouthing, just look at his hare-brained big-ticket schemes to invest in downtown and the lakefront at the expense of the neighborhoods. Aside from gambling casinos and a $360 million DePaul basketball arena and complex, and this multi-million-dollar ($46 million in TIF money which should have gone to schools) goofy Block 37 Superstation, now we're hearing about the city going further into debt, with loans arranged by Obama's people, for a $99-million makeover of the downtown Riverwalk.


Under designs already floated by the city, each block would receive what officials term "a unique identity and landscaping." For instance, the stretch from State to Dearborn streets would be themed "the marina" and feature restaurant retail space, and LaSalle to Wells streets would be "the swimming hole."  -- Crain's