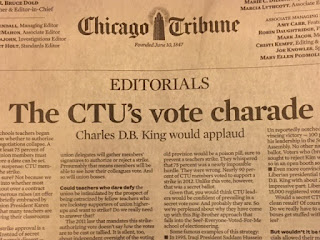 The Tribune's wingnut editors are on a roll this week. They began with a call for a "schoolchildren's Bill of Rights" which had nothing to do with either children or rights, but was little more than a right-wing school  privatization manifesto.

Now the Trib's editorial board, juiced up on  anti-union Trumpomania, has outdone its Mussolini-loving self with a new diatribe against the CTU. The union's crime?  Holding an open strike vote by its members.

This is actually the second strike vote the union has taken. Nearly 90% of all voting members voted in December to authorize a possible strike, but CPS contested the timing of that vote.

The Trib's screed, comparing the vote, mandated by a state law which the Trib supported, with elections in Iraq, Liberia and North Korea, is laughable. To put it bluntly, the Tribune has problems with elections, period.

He told his friends that he had studied union strike authorization votes and that 75% was some kind of magic number. He was wrong in 2012 and he was wrong last year. He never understood that in a democratic union, you can’t short circuit democracy.


The Chicago Tribune is comparing the CTU's strike vote to some of the most undemocratic regimes in the world. What I find enraging here is that the CTU is held to a ridiculously high standard for voting on a strike (75% of entire membership must vote in affirmative.) Think about that: an 80% yes vote on an 80% turnout would still fail. But the CTU is not credited for meeting a democratic standard which virtually no elected official could meet. We are condemned. The appointed Board of Ed is not compared to North Korea and castigated for stalling negotiations for 22 months while their unelected members slash public schools. The Tribune's attack on our vote-by-petition reveals how deeply they despise our power and voice.

Actually, while CPS is still run as a wing of City Hall, by an autocratic mayor and an un-elected school board, the CTU is probably the most democratically-run institution in this town.

On the brighter side, no teachers I know give a damn what the Tribune thinks about their elections.