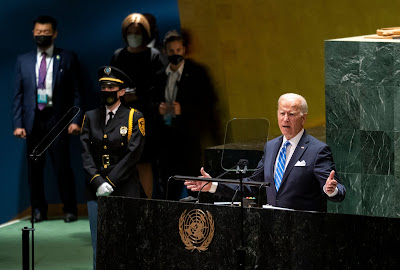 Even while he was preparing to unleash AUKUS, the new white, Anglo-speaking front to contain and confront China with nuclear warships, Pres. Biden tried to play the pacifist in his first address to the U.N. General Assembly.

"Today, many of our greatest concerns cannot be solved or even addressed by the force of arms,” he said. “Bombs and bullets cannot defend against COVID-19 or its future variants.”

I've got this quote stashed away for use in future blog posts.

Biden's speech was meant to distance himself from the previous guy and to prop up this country's fading global image in the wake of U.S. foreign policy disasters involving the pandemic, global warming, and budding cold war with China.

But it failed on all counts and with the botched withdrawal (I call it, repositioning) of troops from Afghanistan -- which included the drone missile attack which killed a family of 10, including small children -- still fresh in their minds, it was met with skepticism on the part of many attendees.

And why not? Biden wasn't about to come clean about his provocative, self-destructive, imperialist strategic shift away from the "war on terror" and towards cold war with China.

Also fresh in the minds of many, especially those representing former colonial and neo-colonial nations, were graphic scenes from the U.S. border with border patrol horsemen whipping and rounding up Haitian refugees for mass deportation.

But Biden swore to the incredulous delegates:

“We are not seeking a new Cold War or a world divided into rigid blocs.”

As Biden himself might say, what a bunch of malarkey!

Notably, he didn’t utter the word “China” once in his 34-minute address. He didn't have to. Everyone knows who AUKUS is aimed at.

It was left to the straight-shooting U.N. Secretary-General Antonio Guterres to set things straight.

"We need to re-establish a functional relationship between the two powers,” he said, calling that “essential to address the problems of vaccination, the problems of climate change and many other global challenges that cannot be solved without constructive relations within the international community and mainly among the superpowers.”

And then this daunting reminder.

“We are on the edge of an abyss — and moving in the wrong direction,” Guterres said. “I’m here to sound the alarm. The world must wake up."