Why WHO wants us to forego booster shots 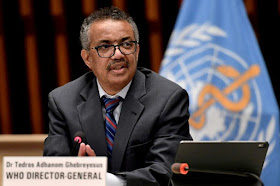 BUDAPEST, Aug 23 (Reuters) - WHO Director-General Tedros Adhanom Ghebreyesus said on Monday that COVID-19 booster shots should be delayed and priority should be given to raising vaccination rates in countries where only 1% or 2% of the population has been inoculated.

If vaccination rates are not raised globally, stronger variants of the coronavirus could develop and vaccines intended as booster shots should be donated to countries where people have not received their first or second doses, he said during a visit to Budapest.

"In addition, there is a debate about whether booster shots are effective at all," Ghebreyesus told a news conference with Hungarian Foreign Minister Peter Szijjarto.

While I agree with the WHO director's call for making (demanding) vaccine distribution to where the need is greatest a priority, I'm having a hard time understanding his organization's anti-booster strategy. The problem facing us doesn't seem to be a global vaccine shortage so much as a politicized pandemic and entrenched systems of racial capitalism (imperialism) and vaccine apartheid which have sharpened the division between oppressed and oppressor nations.

In this country, for example, there is a vaccine surplus. Yet millions here remain unvaxed, either due to lack of access to affordable medical care or due to the effectiveness of anti-vax propaganda and fear-mongering on the part of right-wing media. Even with this surplus, only limited supplies of the vaccine are being made available to low-income countries.

The giant pharmaceutical companies and other vaccine profiteers are reaping billions in superprofits by keeping vaccine costs high and maintaining patents on vaccine production.  Global vaccine distribution has also become politized and weaponized in the new cold war aimed at containing China.

The cost of vaccinating the world against COVID-19 could be at least five times cheaper if pharmaceutical companies weren’t profiteering from their monopolies on COVID-19 vaccines.

Vaccine inequity remains the world’s biggest obstacle to ending this pandemic and global economic recovery. But Ghebreyesus seems to be assuming that if people here and in Europe agree to forego booster shots, their dose will then be shipped to a needy person in Uganda or Nicaragua.

In fairness to Ghebreyesus, he includes in his call, this addendum:

Those whose immune system is compromised should get a booster shot, though they represent only small percentage of the population.

It's actually about 3% of the population in the U.S. But depending on the life span of current vaccines, booster shots may soon be required for everyone.

As for the current effectiveness of booster shots, I will leave that one to the scientists and medical professionals.