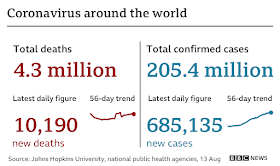 Trump and the Republicans called it the "China Virus" or "Kung Flu." Pretty racist and disgusting. Biden and the Democrats are not much better. They continue to play Trump's blame-China game rather than move forward on international cooperation in the war against COVID and its emerging variants.

But a look at current data compiled by Johns Hopkins University along with national public health agencies shows that  China is playing more of a leading role in the world when it comes to containing the spread of the virus while the U.S. remains the principal driver of covid as the Delta strain becomes dominant.

Currently, it's the US, India, and Brazil that have the highest number of confirmed cases, followed by Russia, France, the UK, and Turkey. The U.S. with more than 36 million cases and over 616,000 deaths has the highest total number of cases, deaths, and death rates in the world.

The U.S. is now averaging about 650 deaths a day, increasing more than 80 percent from two weeks ago and going past the 600 mark on Saturday for the first time in three months.

Compare that with China, which has four times the population of the U.S., but has had a tiny fraction (106,000) of cases and has suffered fewer than 5,000 deaths so far, according to the researchers at Johns Hopkins.

In other words, there's a lot U.S. health experts and policymakers could learn from China when it comes to fighting the pandemic. At the top of the list is China's national healthcare system. In the U.S. more than 30 million people have no health insurance.

But scientific cooperation between the world's two leading economic powers is being hindered by Cold War propagandizing, tariff wars and back-and-forth sanctioning. The biggest losers in all this are the poorest of the world's countries suffering from severe vaccine inequality.

The continuing yellow-peril demagoguery coming out of the White House and State Dept. has done great harm to efforts to close the great vaccine gap or promote international cooperation, while raising the economic and political barriers between the two countries and bringing them closer to unfathomable war. It has also led to an uptick in the growing wave of anti-Asian violence here in the U.S.

File under global inequity.
The US is currently the principal driver of covid spread as the Delta strain has become dominant throughout the world. pic.twitter.com/nWJA1vbOiq