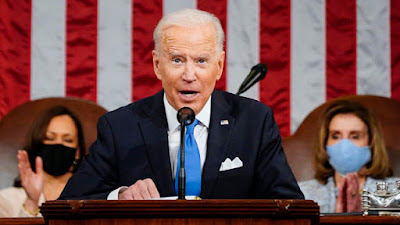 We’re in a competition with China and other countries to win the 21st Century. -- Pres. Biden's address to Congress last night

Every gun that is made, every warship launched, every rocket fired signifies, in the final sense, a theft from those who hunger and are not fed, those who are cold and are not clothed. -- Pres. Eisenhower, 1953

That last quote is from Eisenhower's Chance For Peace speech in 1953.  It took the former 4-Star General to warn us against the country's exploding post-war military budget. But as the Cold War deepened during his administration, political pressures for increased military spending mounted. By the time he left office in 1961, he felt it necessary to warn of the military-industrial complex in his farewell address.

I was reminded of Ike's warning last night, listening to Pres. Biden couch all of his ambitious (but not adequate) $6-trillion post-pandemic infrastructure rebuilding and jobs programs in jingoist, America First,  anti-China, Cold War rhetoric.

Biden called on Congress to invest in infrastructure, education, child care, civil rights, and science calling them programs that will allow the U.S. to win a competition with China. Like Trump, Biden is committed to a distinctly anti-China global strategy rooted in fears of American decline.

Yes, those investments are exactly what we need. But not for the sake of winning some mythical and dangerous global race to the top. Remember, that was Arne Duncan's rationale for pushing testing madness and school privatization when he was Obama's ed secretary. My 4-year-old granddaughter doesn't need to be prepared in pre-school to compete with 4-year-olds in China or Switzerland for global hegemony, thank you.

It's this kind of thinking that has led to the global vaccine wars when international cooperation in the fight against the pandemic could have saved millions of lives and prevented the current catastrophe in India.

It has also led Biden to push for a bloated Pentagon budget that's even larger than Trump's. The rationale behind the push has to do with illusory U.S. imperial ambitions to impose its will on other countries and engage in regime change when it can. These ambitions leave me even more skeptical about his planned withdrawal of the remaining troops in Afghanistan. Are they really being brought home or simply being redeployed for continuing conflict in the region? Does a redeployment mean a new buildup of American military power to confront China and Iran?

Yes, according to a report in today's NYT:

The Pentagon is looking to place troops near Afghanistan to track and attack militant groups if they threaten the United States. Possibilities in the region include Tajikistan, Kazakhstan and Uzbekistan, but those countries are under the sway of Russia to one degree or another, Attack planes aboard aircraft carriers and long-range bombers flying from land bases along the Persian Gulf and even in the United States could strike insurgent fighters spotted by armed surveillance drones.

Or is the China yellow-peril ("they're closing in on us") fearmongering simply being used as a way to appeal to resistant Trump Party members in a vain attempt to build "bipartisan" support for his new initiatives? If it is, it's a pipe dream.

I also told President Xi that we will maintain a strong military presence in the Indo—Pacific just as we do with NATO in Europe – not to start conflict – but to prevent conflict."

He failed to explain how putting U.S. warships in the South China Sea would prevent conflict rather than inevitably provoke a new one.

China and other countries are closing in fast," warned Biden. "We have to develop and dominate the products and technologies of the future: advanced batteries, biotechnology, computer chips, and clean energy."

Other countries "closing in" on us? What a myopic, paranoid, us-against-them view of the world.

Biden's guns-and-butter strategy is bound to bump heads with his progressive initiatives. That's too bad. They're worthwhile initiatives.