Trump: 'I't may take a traumatic event to unify the country.' 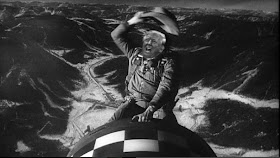 I rarely watch SOTU. I wait to read the transcript the next day looking for keywords. The first thing I look for, out of force of habit, is education. D.T.'s only mention was this:


Let’s open great vocational schools so our future workers can learn a craft and realize their full potential. (Applause.)

Nothing about "choice", vouchers, charters, teacher unions, Betsy DeVos...nada. As for unfunded voc-ed for the poor, Nancy Pelosi said it best:

I won't take up space here to debunk last-night's long trail of lies and disinformation. MSM did that well enough this morning.

The first was his commitment to expand the nuclear arsenal and use the threat nukes as a "deterrent".

The second, even more frightening took place in his earlier meeting with network news anchors. Trump told them that he would like to "unify the country" but that because of the "tremendous divisiveness", it would likely be impossible without a traumatic event affecting Americans.


“I would love to be able to bring back our country into a great form of unity,” Trump said. “Without a major event where people pull together, that’s hard to do. But I would like to do it without that major event because usually that major event is not a good thing.”

His meaning was clear.