Rauner asked, 'Is David Duke a racist?' He dodges like Trump did. 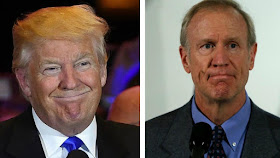 Remember when candidate Donald Trump refused to condemn the KKK and specifically David Duke as racists? It certainly was a harbinger of things to come.

Fast forward to the current race for governor in IL where racism and the push-out of thousands of the state's African-American families are among the hot campaign issues. It's deja vu all over again.


MAZE JACKSON: “The President of the United States used language that we’ve never heard before, we call – we said he said ‘shitolee’ on this show. You heard his comments. Is Donald Trump racist? Is he a racist?”

RAUNER: “I’ll say this. That language has no place in our political conversation.”

JACKSON: “But is he a racist?”

JACKSON: “But we’ve got it. We heard it. He said it. So it’s in the universe. So, to a – to the Haitians that live in this city, in the state – what’s up with Donald Trump? How do you respond to that?”

CHARLES THOMAS: “But you won’t call him a racist?”

THOMAS: “Is David Duke a racist? I mean, is… what about Donald Trump?

So shameless Rauner, who has a wing-nut Republican on his right and Democrats on his...you decide, won't publicly call out racism in its most obvious form for fear of alienating what remains of his right-wing, downstate base. Now he's suddenly for overthrowing the whole system.

Trying to avoid total embarrassment, we later hear this from a Rauner staff member:


“The governor believes that David Duke is a racist,” Justin Giorgio, a spokesman for Rauner’s campaign, said later in an email. “As he stated in his interview this morning, the governor is working to bring all Illinoisans together to overcome the racism that exists in our society.”

For all this slip-sliding and evasion, Rauner gets a personal thank you from the former Grand Dragon himself.