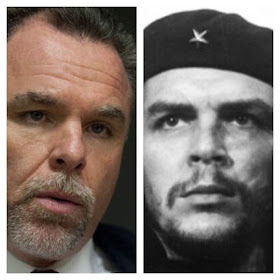 Supt. McCarthy goes all Che Guevara on us.

"I know what needs to happen. It's clear to me as anything on earth. It's a systematic failure and the system has to change." -- ABC 7


Yesterday's City Council budget hearings were like none I've seen since the 70s run-up to the election of Harold Washington, the city's first black mayor. The crisis is so deep that the mutiny has spread way beyond the few and the brave in the Progressive Caucus. Previously isolated rivulets of anger with Rahm/Rauner austerity, property taxes, education cuts, school closings, charter expansion and the gun violence epidemic appear to be flowing into one big river of anger around the budget hearings.

Students at three high schools attempted walkouts yesterday in protest of the budget cuts and in support of their teachers. Roosevelt students succeeded. Students at Schurz and Foreman were blocked by cops and CPS security. There's no prison-break manuals in Common Core.

A SmallTalk salute goes out to Roosevelt teacher Tim Meegan for supporting and inspiring his students. 40th Dist. Rep. candidate Harishi Patel (running in Deb Mell's former district) was also out there with the students.

Monday's Black Caucus presser calling on the mayor to dump Supt. Garry McCarthy, sent tremors up to the 5th floor of City Hall. It even included several formerly docile alders joining with the progressives in open revolt. The catalyst may have been the The Tribune's gross Oct. 1 editorial, Aldermen, own Chicago violence, which sounded to me like a McCarthy plant. 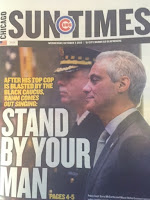 Rahm hit back at the Caucus in a show of white solidarity, with a statement of all-out support for his top-cop. He went so far as to second (first) McCarthy's pick of Dean Andrews as his chief of detectives. Andrews is currently under investigation for engineering the cover-up in the killing of David Koschman by Mayor Daley's nephew R.J.” Vanecko and has been named 114 times in Special Prosecutor Dan Webb's 162-page report on the case. None of that mattered when it came to circling the wagons around McCarthy in the face of the Black Caucus threat.

The Trib brazenly doubled-down on its racist diatribe in today's editorial, leaving no doubt that their accusations and venom were directed only at black aldermen and not all 50 as they previously claimed. Today, the Trib boasts that their "suggestions really got under the skin of aldermen, particularly those who live in the city's most violent wards" (more code language).


This charge that we blame the police is a fiction, nothing more.

It is true that many in our communities have experienced difficult or unjust treatment at the hands of some police officers. Our city is paying huge settlements to victims of such treatment. The relationship can be an uneasy one. This is not some fantasy we made up. From disgraced former Chicago police Cmdr. Jon Burge to "black sites" to stop-and-frisk tactics, it is understandable that there is a breach of trust between the police and people of color and the poor in some of Chicago's most distressed neighborhoods.

I respectfully suggest that your editorial board stop sowing division and casting blame, and instead offer constructive support for our efforts to build a better city for all Chicagoans.