Is Rahm looking for a war on special ed? 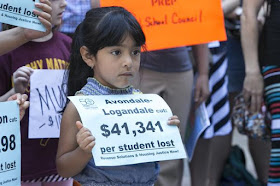 Rahm has put his bureaucrats and principals on radio silence regarding the latest cuts, says DNAInfo's Heather Cherone.


CPS officials declined to answer repeated inquires from DNAinfo Chicago reporters Monday about the formula — apparently based on enrollment figures also released Friday evening — used to make those cuts, and ordered principals not to speak with reporters trying to figure out what the cuts would mean for special education students in neighborhoods throughout Chicago.

Originally, principals were given to the end of the day Monday to appeal the cuts, which sent parents scrambling on social media to figure out if their children's schools would have enough staff to meet the requirements of each student's specialized education plan.

The latest round of cuts, coming weeks after the start of the school year, further destabilize the schools (could it get any worse?), expand class size, and disrupt the lives of the system's neediest students and families -- the ones who need stability the most. Principals are outraged. But will more than a courageous few speak out? Doubtful.


News of the cuts "exploded across social media", says Cherone, with Wendy Katten, the co-founder of parent-advocacy group Raise Your Hand, leading the charge on Facebook. Katten is worried that only those schools where parents are able/willing to sue will get some of these positions back.


“No one told principals this was happening. All the sudden, I had five special ed teachers. Now, I’ve got three.”

Blaine Principal Troy LaRaviere (my choice for next mayor of Chicago), who was chastised last month for criticizing the mayor and CPS, writes:


“Adjustments” is CPS’ latest euphemism for cuts to student services. If they keep it up, they’re going to “adjust” students out of their education entirely. CEO Forrest Claypool often repeats a talking point that the cuts CPS will “have to make” are “unconscionable.” If one thinks the cuts are “unconscionable” then one does not give those cuts a false euphamistic name like “right-sizing.”

It also could put CPS in violation of federal law. Look for a wave of lawsuits and expensive legal battles (a re-run of Corey H?) to follow, wiping out any potential savings gained from the layoffs.

Billions in federal special-ed dollars flow to school districts and federal law requires public schools to meet the needs of all students with learning difficulties and to do so without isolating them from other children.

Rod Estvan, education policy analyst at the disability-rights group Access Living, predicts there will be fewer special education teachers to support the regular classroom teachers, which could lead to more students in isolated classrooms. If that’s the case, the district could end up out of compliance with federal law.


“They’ll be penalized by the federal government on next year’s allocation for federal dollars for  (special education). They’ll have even less money to function.”

Without substantial funding coming from the State, as many as 5,000 more teachers could lose their jobs later this year.


"Virtually every student will experience chaos as every school in the city will need to be reprogrammed in the middle of the school year. The educational experience of our students would be gravely damaged in ways that go beyond those immediate frontline layoffs."

SPEAKING OF EXPENSIVE LEGAL BATTLES...The Sun-Times reports that The Board will likely hire Ronald Marmer as its new lead attorney for the district who apparently has no public sector experience and has donated nearly $30,000 to CEO Forrest Claypool's past campaigns.


Estvan: restoring 60 positions already indicates this audit that was done was not correct. Something is WRONG. #cpsboard
— WBEZeducation (@WBEZeducation) August 26, 2015