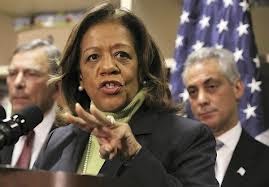 DATA-DRIVEN... EdWeek's headline reads: Chicago's Closures Drove Most Students to Better-Rated Schools. But dig down in into the story and you learn that Univ. of Chicago researchers found "a higher-than-expected percentage of students enrolled in schools that were rated as Level 3, the district's designation for the lowest-performing schools" and that "only 21% attended Level 1 schools."

They found that the majority of students who enrolled in schools other than their assigned replacement wound up in lower-performing schools. The U. of C. study also found that the district's criteria for what constitutes a good school were often different from those of families considering where to enroll and that for most parents, higher test scores weren't their top consideration when deciding which school their children would attend. Safety was.


"I think the main takeaway for us, or for me at least, is nearly all the displaced students attended schools that were higher performing than the closed ones. But those schools were not substantially better than the ones that closed," said Marisa de la Torre, one of the study's authors.

"The things that keep coming back again and again are these issues of safety and transportation and not enough good options near where the families live."


...the report "demonstrates that we kept our promises and upheld our commitments to our students and school communities... These results are based on the strategic, thoughtful, coordinated approach we took to managing the transition process."

Are we looking at the same study?