The pipeline from corporate America to the nation's charities is starting to dry up, as losses in the stock market mount and the U.S. recession deepens. With many large organizations depending on corporate largesse, their futures are suddenly uncertain. In a related piece, WSJ predicts big cuts in Gates funding. Among the beneficiaries feeling the pinch are Harlem Children's Zone Inc.

"I'm spending a lot of time now thinking about how we could replace the kind of support we've received from Wall Street," says Geoffrey Canada, president of the organization, which provides parenting classes and charter schools for poor families. Mr. Canada says he is cutting 10% of his staff of 1,400.

A post-campaign look at Bill Ayers and ‘The Crucible’ 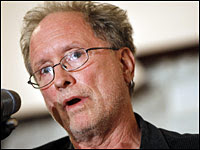 Sarah Palin's accusation that Obama had been "palling around with terrorists" was an offensive lie, which is to say it was business as usual for the most negative, dishonest campaign in several decades. As for Ayers himself, though, who cared? Ayers made me care. He came across as intelligent, sympathetic, multi-dimensional and reflective - in other words, like an actual human being.