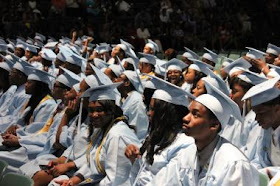 Well, it's that time of year when the media spotlight in all the privately-run charters schools that supposedly enroll 100% of their students in a college program. Of course they fail to mention they mean 100% of the 25% or fewer that make it from freshman year to the graduation ceremony.

I wonder how many of those 100%-ers actually show up for college classes, can afford skyrocketing tuition, or graduate some time down the road. Urban Prep, for example, continually boasts about it's college-acceptance rate for the few that graduate, but rarely about reading and math scores which are among the lowest in the city. This year only 24% of students at this school are considered proficient in math and/or reading.

Check out the number of Urban Prep Charter Academy (Englewood) 9th-graders in 2014, compared with the number that make it to senior year.

Or the high-flying Noble St. charters which lost about half their students by senior year.

Here's the latest from U of Chicago's research consortium on the city's graduation rates:


Chicago’s open enrollment high schools were the driving force behind a steady rise in graduation rates citywide over the past 15 years. In fact, new findings by the University of Chicago’s Consortium on Chicago School Research say graduation rates at schools that have to accept anyone have just about caught up to publicly funded, privately managed charter schools.

“Notably, we find significant growth in graduation rates at neighborhood high schools. It does not seem this progress has come at the expense of student achievement; in fact, graduates are more qualified than in the past,” said Elaine Allensworth, the lead author of the study on high school graduation rates. (Sun-Times)

This, despite all the advantages -- smaller size, outside funding, few special needs and ELL students -- given to the city's charter school operators and massive cuts in neighborhood school budgets.


While the report acknowledged that charter and selective-enrollment schools attracted some top students, researchers noted that even as charter schools gained students “the gap in graduation rates between charter and neighborhood schools has diminished.”

Makes you wonder about the continued expansion of privately-run charters and selective-enrollment schools which skim the top-scoring students.