Mayoral Control Has Been a Bust 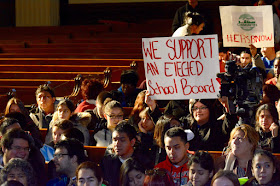 It's hard to fathom why state political leaders thought it was a good idea to turn Chicago Public Schools into a wing of City Hall—surely one of the most disreputable institutions in the country—let alone placing power over the schools in the hands of one man.

Now, after two decades of destabilization, failed reforms and mismanagement, it's time to join with every other school district in the state, and nearly all districts nationally, in electing our school board.

The failed strategy was forced on our city in 1995 when Republicans, who controlled both houses in the state Legislature and the governor's mansion, threatened to withhold funding for CPS unless then-Mayor Richard J. Daley took over the schools, implemented austerity and weakened the teachers union. Sound familiar?

Their motives were questionable. Springfield's disdain for the heavily black and poor inner city and its schools was obvious. Republican minority leader James “Pate” Philip was fond of calling Chicago schools “rat holes.” They thought they had Daley over a barrel, but he was smart enough to take the deal and run with it.

To the patronage-heavy Democratic machine, CPS looked like a gold mine. It had a bigger budget than the city itself and even more jobs to hand out. Political liabilities could be taken care of by juking the test scores and dropout numbers. Daley's first handpicked CEO, Paul Vallas, was a master of media spin, and Daley soon was being called the “education mayor.”

Vallas was followed by Arne Duncan, who would lay claim to the “Chicago Miracle,” otherwise known as Renaissance 2010. It was the forerunner to the current mayor's disastrous test-and-punish/mass school-closings/charter expansion policies. Duncan took those polices with him to Washington and pushed them on the entire country with Race to the Top. Duncan and the Obama administration are reportedly reconsidering those policies.

Within a year of Duncan's departure from Chicago, a report from the Civic Committee of the Commercial Club called the reforms “an “abysmal” failure. Ironically, the Civic Committee had designed and financed Renaissance 2010—the very plan Duncan was hired to implement and enforce.

Duncan's funneling of federal dollars to promote this so-called “reform” agenda, required big-city mayors to serve as enforcers, leading Obama's appointed secretary of education to declare in 2009: "At the end of my tenure, if only seven mayors are in control, I think I will have failed.” Today there are basically three left: Chicago, New York and Washington, D.C. In a dozen other cities, mayoral control has been junked or thrown out by the courts.

As for accountability, Emanuel's rule over the schools has become known for anything but. Scandal after scandal, from the UNO charter school fiasco to the Supes Academy no-bid-contract debacle, have led to the mayor's own implausible denial of responsibility.

One need only look at the guilty plea of the mayor's handpicked school's chief, Barbara Byrd-Bennett.

Since the mayor's own political success is bound up with the reporting of positive school outcomes, some of his administration's claims of higher graduation rates and test scores are being challenged by the Better Government Association and others. BGA President Andy Shaw writes: “The problem with fuzzy math is that real people are behind the numbers—people who deserve a city government that confronts reality head-on, not by cooking the books and declaring Pyrrhic victories.”

The board's financial dealings show structural imbalances with an over-reliance on external borrowing policies and have helped push CPS credit ratings to below junk status.

Continuous leadership churn has led to systemic instability. There have been three school CEOs in the past four years of Emanuel's administration and six appointed school CEOs in the past eight years. The instability and the appointed board's leadership failures were critical in the breakdown of the negotiations with the Chicago Teachers Union, which precipitated the 2012 teachers strike and led to then-CEO Jean-Claude Brizard's replacement.

In the past few years, nearly 90 percent of voters have passed every nonbinding ballot proposal for an elected school board. How many other reasons do we need to do away with one-man rule of the schools and bring representative school board elections to Chicago?

This article is cross-posted at Crain's Chicago Business:  http://www.chicagobusiness.com/article/20151104/OPINION/151109950/time-to-end-mayoral-control-of-chicago-public-schools#main-disqussion