Trying to make some sense of the Wisconsin vote

The right is jubilant. Just look at them dance for joy. Read their headlines:

I haven't had time to really analyze the vote totals yet. I'm still not sure who voted and who didn't, especially in cities like Milwaukee, Madison, Kenosha, and Racine although I hear the turnout there was at record highs. Three-fourths of the state's African-American population lives in Milwaukee and I know the black and Latino vote went heavily for Barrett, as did the youth and women's vote.

What I can already see is that, considering Walker outspent Barrett 10-1, his 7-point margin of victory ain't much. Nobody in Wisconsin really won anything here. If anything, this was a victory for Citizens United and the Koch Bros. and a big defeat for the democratic process, such as it is. And what did Walker's T-Party billionaires really get for their $45 million? They managed to retain control over the State House that they already had. Only now, they will have to spend the rest of the year, heading into the national elections and the rest of Walker's term, confronted by a well-organized (if poorly-funded) grass-roots movement, spearheaded by organized labor. Does that put them in an envious position? I don't think so. 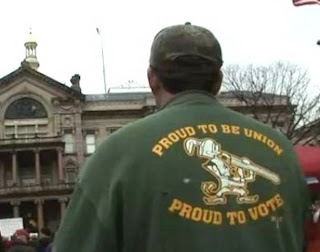 Interestingly, exit polls showed that 65% of Walker's votes came from people who didn't necessarily agree with his union-busting policies, but  who thought the idea of a recall election was a bad way to get rid of election pols. Also, Barrett, wasn't a strong candidate, only ran a short, underfunded campaign and certainly wasn't really a strong pro-union candidate. Some 37% of union households voted for Walker.

As for "doom"  for Obama, I doubt it. The Democrats carefully and consciously kept Obama away from Wisconsin as did the Republicans with Romney. Wisconsin is a battleground state that went for Obama in '08. The Dems certainly weren't going to invest big capital in a race that they had already decided was a probable loser.  As a result, Obama most likely comes out of this unscathed. In other words, Obama once again did the smart thing rather than necessarily the right thing.  What else is new?  Exit polls showed most voters favoring Obama over Romney by a 9% margin, a bigger margin that Walker's victory over Barrett.

Nagging questions remains however. What if the DNC had put $10 million more into this race? What if Obama and other heavy hitters had been more visible and held massive campaign rallies in Milwaukee and Madison? Could they have squeezed another 150,000 votes on top of an already high voter turn out? We'll never know.

What-ifs aside, the progressive movement in Wisconsin continues to grow. Hopefully it will regroup and continue to fight in defense of schools, teachers and collective bargaining rights for the state's public employees.